One night with Snook 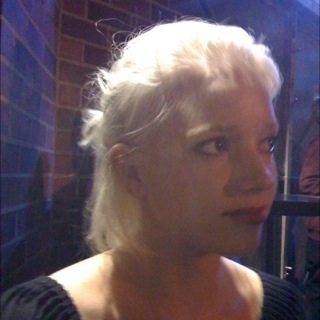 I had a pretty crazy twenty four hours including a hockey wind-up gone awry, then disrupting a dance recital, declaring that dancer Jacqui was my best friend, getting sent home and driven home by Jacqui, returning to the city in defiance, running into trash-bag Amy (affectionate name) then meeting an intriguing character that would haunt me for years to come. Her name was Sarah Snook and she worked at the Cat Haven. At some point she sat down beside me, scared off Amy and we talked for a long time through the early hours of Sunday morning about how difficult it was to decide what cats lived and died. She lingered beside me for a while, even after it became difficult to speak as the night club was closing up. The last song that night was announced and I will forever regret not asking her to dance. She did give me her number but she never replied to a follow up message the following week. This photo was what my iPhone 3G captured in the contacts app when we were swapping numbers. Terrible resolution, but still probably one of the most beautiful photos I have ever taken. Butterflies at the top of West Mt Barren

A bit of WBBL at Lilac Hill